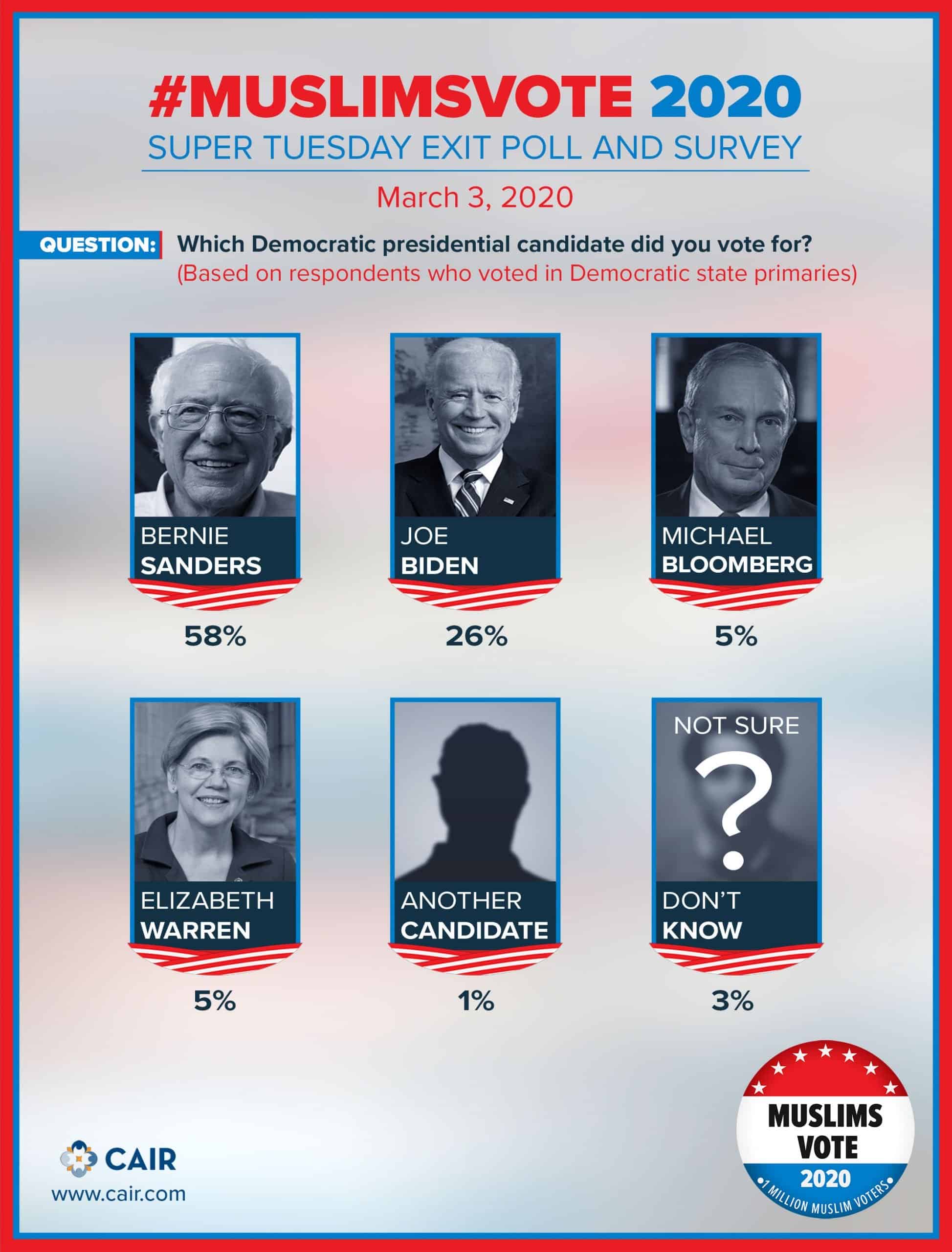 CAIR’s poll indicated that the majority (58.2 percent) of AmericanMuslim voters who participated in state Democratic primaries on Tuesday, March 3, voted for Bernie Sanders, followed by 26.8 percent for Joe Biden, 5.4 percent for Michael Bloomberg, 5.1 percent for Elizabeth Warren, and 1.4 percent for another candidate.

The survey also indicated that 51.1 percent of American Muslim voters affiliate with the Democratic Party, and 17.5 percent with the Republican Party, while 24.5 percent identify as independent or not a member of a party.

MEDIA ADVISORY: CAIR representatives are available to discuss the findings of the survey. Email: [email protected]

McCaw added: “Candidates running for office who want to better understand the views and attitudes of American Muslim voters must read this report.”

The survey also questioned Muslim voter households, regardless of political party affiliation, about their views on a wide range of social and policy issues, including refugee resettlement, healthcare reform, climate change, raising the federal minimum wage, and ensuring affordable housing.

The highlights of CAIR’s #MuslimsVote 2020 Super Tuesday Exit Poll and Survey include:

Survey participants were drawn from a database of more than 55,394 Muslim voter households. Calls were conducted on the evening of Tuesday, March 3. Respondents included 296 men and 299 women from across the nation. The poll’s margin of error is +/- 4%, with a confidence level of 95%.

The American Muslim voter database was developed by matching state records of registered voters with an extensive list of some 45,000 traditionally Muslim ﬁrst and last names. In compiling this list, common names prevalent among Muslims across the world’s Muslim-majority ethnic groups were identiﬁed and veriﬁed by well-informed members of these ethnic groups.

Although it is the largest such list compiled to date, this pool of Muslim voters does not include Muslims with uncommon names or those who do not have traditionally Muslim names. Also excluded are Muslims with names that are also common in other communities (such as Sarah or Adam).