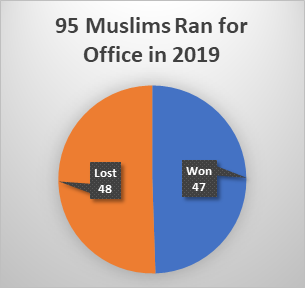 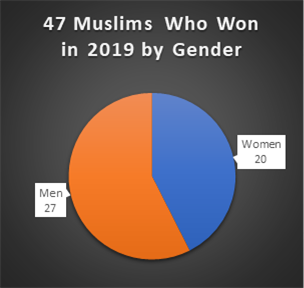 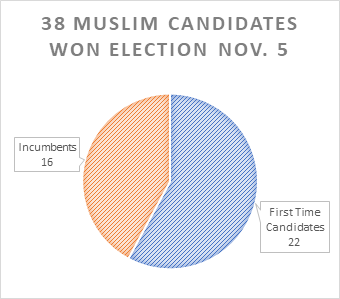 Throughout 2019, CAIR and Jetpac have identified at least 47 Muslim candidates who won elections in local and statewide races across the country. More than 90 Muslims ran for office this year at the local and state level.

“These electoral victories clearly indicate that American Muslims are stepping up and showing their commitment to public service,” said CAIR National Executive Director Nihad Awad. “We congratulate these Muslim trailblazers who are creating a more inclusive democracy for everyone.”

“American Muslims are running for office in large numbers because more of us are realizing that we have a unique perspective that will help fix massive inequities in healthcare, education, and the criminal legal system,” said Jetpac Executive Director Mohammed Missouri. “We’re also aware that staying on the sidelines while anti-Muslim bigotry runs rampant will increase the threat to our community. A truly representative Democracy will help us get out of this dark era as a stronger society.”

CAIR and Jetpac maintain an up-to-date public database of over 500 Muslim candidates that have run for office in the past several years.

On behalf of the American Muslim community, CAIR and Jetpac congratulate the following Muslim candidates on their hard-fought and trailblazing victories:

The report includes profiles of those who ran for office during 2018 and 2019, including newly-elected Pennsylvania State Representative Movita Johnson-Harrell, Virginia State Delegate Dr. Ibraheem Samirah and Montgomery (New Jersey) Township Mayor Sadaf Jaffer, among many others elected in 2019.

Jetpac (Justice Education Technology Political Advocacy Center) is a training and educational organization that seeks to build a strong American Muslim political infrastructure and increase the community’s influence and engagement.